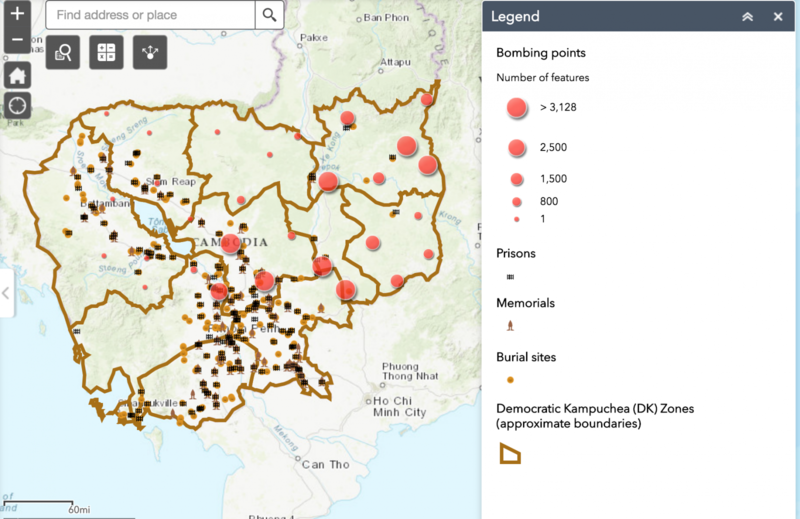 CGEO is a searchable, interactive database of maps, satellite images, and detailed information on 130,000 locations across Cambodia. It includes:

2) another series of layers showing, on any of those maps:

Any of the first series of layers can be displayed in combination with any or all of the second series, along with other geographic layers such as the boundaries of provinces (khet) and subdistricts (khum), DK-era Zone (phumipeak) and Region (damban) boundaries, and roads and watercourses. Just click on any selected box(es) in the map’s legend at right, then “Refresh.” Map layers listed closer to the top of the legend display over those listed below them. Zoom in by clicking the ‘+’ magnifying-glass icon (second from top at left) and drawing a square around a selected portion of the map.

To read attributes of any points in the second series of layers, click on the appropriate boxes in the legend at right, to make the points “Visible” and “Active,” then on the Information icon “ i” in the black circle at left of the map, and move the cross-hair cursor to click precisely on the selected point on the map. For phum, this displays the name of the village on that site.

For U.S. bombing points, attributes of a site’s bombardment are displayed in tabular form, e.g. the date of the bombing, exact location, the number and type of aircraft in the sortie, bombing load and ordnance type, the nature of the intended target, and bomb damage assessment (BDA). (Warning: The specific field recording bombing ‘load,’ i.e. weights of munitions dropped by U.S. aircraft, is often very inaccurate.) The dataset details the 42 aircraft types deployed, including B-52’s, and the 188 types of munitions they dropped, including 500-lb. ‘carpet bombs’, cluster bombs, fire bombs and 1000-lb. bombs.

For the DK mass grave sites, attributes include the estimated number of pits and bodies.

Sources and Acknowledgements
The latest version of the CGEO has been updated by the Center for Science and Social Science Information with special thanks to Miriam Olivares, Kangning Huang, and Rich Richie. CGEO’s 2005 version was prepared by Yale’s Cambodian Genocide Program in collaboration with Mr. Abraham Parrish of the Map Collection at Yale University Library.

The CGP obtained and compiled the satellite images and mosaics of Cambodia with the assistance and expertise of the Center for Earth Observation (www.yale.edu/ceo) at the Yale Institute for Biospheric Studies (www.yale.edu/yibs), of which the CGP is an Affiliate and grant recipient. We thank Profs. Karl Turekian, Derek Briggs, and Ron Smith, and the CEO’s Laurent Bonneau, Douglas Morton, and Eden Enclona.

The US bombing database was released by the US Embassy in Cambodia to the Royal Cambodian Government and the Cambodian Mine Action Authority (CMAA) to assist in the clearance of unexploded ordnance. Mr. Taylor Owen of the Peace Research Institute in Oslo, Norway, obtained a copy in Phnom Penh. Mr. Owen, now at Oxford University, kindly provided this data to the CGP in 2004, when he was a Visiting Fellow in the Genocide Studies Program at the Yale Center for International and Area Studies (www.gsp.yale.edu). Further resources on the US role in recent Cambodian history are listed here.

The Cambodian Genocide Program, its Documentation Project at the University of New South Wales, and the Documentation Center of Cambodia jointly compiled the Democratic Kampuchea prison, mass grave, and memorial data in 1995-2001, with the help of grants from the Australian and Netherlands governments. For more details of the CGP mapping project, click here.