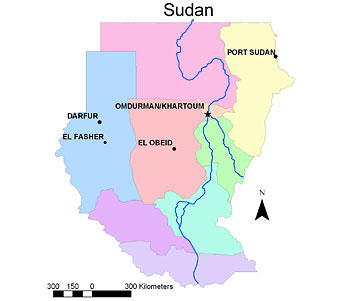 When Sudan attained independence (from Great Britain) in 1956, it inherited a rebellion by southern rebels against Khartoum-based rule.  Identity based divisions, both between and within the warring sides, characterized both phases – the 1955-1972 “First Sudanese Civil War” and the 1983-1995 “Second Sudanese Civil War” – of what turned out to be an enduring conflict.  The government of Sudan repeatedly employed a strategy of targeting civilians in particular regions, as part of an effort to deter support for the rebellion against it.  Areas such as Blue Nile, South Kordofan and witnessed attacks against civilians, frequently originating from the national army or from sources affiliated with it.

In 2003, a rebellion broke out in the western region of Darfur.  Although the rebels in Darfur did not claim or seek common cause with those in the south, they pursued similar objectives, including greater autonomy from Khartoum-based control.  The government of Sudan responded by mobilizing so-called janjaweed militias, which waged a scorched earth campaign against civilians in the region.  Following the lead of several scholars (e.g., Eric Reeves, Gérard Prunier), and activists (e.g., John Prendergast and his Enough Project), the U.S. Congress, Secretary of State, and President (George W. Bush) all labeled the violence in Darfur “genocide” perpetrated by the government and its allied forces.  A United Nations commission created to investigate the question (among others) declined to declare that a genocide had occurred, but did defer further investigation to the International Criminal Court (ICC).  The ICC subsequently issued warrants for Sudanese President Omar Bashir on several charges including (eventually) genocide.  Specifically, a warrant issued in July 2010 accuses Bashir of committing genocide “by killing”, “by causing serious bodily or mental harm,” and “by deliberately inflicting on each target group conditions of life calculated to bring about the group’s physical destruction.”

Meanwhile, pursuant to a referendum proposing secession from the rest of the country, South Sudan became independent in 2011.  However, tensions – and fighting – continued to plague border regions such as Abeyi and South Kordofan, where the government allegedly employed similar tactics against civilians to those used in the civil war.

Resources on the Sudanese Genocide

Other Resources on the Sudan Civil War

Report of the UN International Commission of Inquiry on Darfur

Report of the UN commission on Darfur

International Criminal Court’s home page for the “situation” in Sudan

Sudan in 1990 (after genocide began in the south)

New Bloodbath in the Making