Deforestation of the Ixil Triangle 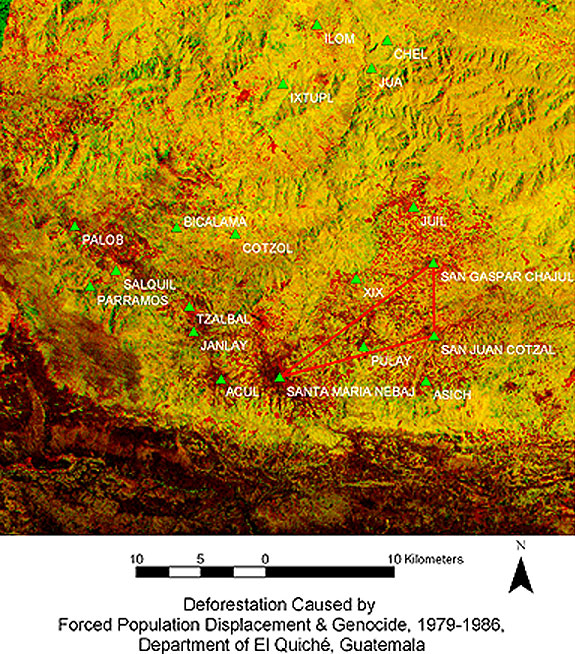 Location 1 of the GSP’s study of satellite imagery of the Guatemalan genocide is the area containing the “Ixil Triangle,” in the central sector of the Department of El Quiché (see image 2). Guatemala’s Maya Indian population is primarily concentrated here and in other parts of the country’s mountainous northwest, while Ladinos occupy the lower and more agriculturally productive south and east portions of Guatemala. The three municipalities of Santa Maria Nebaj, San Gaspar Chajul, and San Juan Cotzal demarcate the Ixil Triangle’s vertices. The central sector of El Quiché is the historical home of Guatemala’s Ixil Indians, a relatively isolated, ruggedly mountainous region. Between 1977 and 1986, El Quiché’s population was approximately 80 to 100 percent Mayan. During the government-sponsored Guatemalan genocide from 1981-83, El Quiché experienced some of the highest frequencies and magnitudes of killings. (See Victoria Sanford’s Charts 3-6.)

Implementation of President Efrain Ríos Montt’s “scorched earth” strategy brought the violence to a peak in 1982-1983. During this period, the military systematically destroyed virtually all of the rural settlements surrounding the municipalities of Santa Maria Nebaj, San Gaspar Chajul, and San Juan Cotzal. In late 1983, the army launched its program of Development Pole villages. A development pole was a decentralized regional development zone. Villages previously located on hillsides with each house surrounded by its own varied-sized lot, were now laid out in a concentrated, rectilinear grid pattern.1

These “Model Villages” were an important part of its “guns and beans” (fusiles y frijoles) counterinsurgency program. Villagers displaced by the violence and still surviving in the area of their former residences were forced to live in concentrated model villages.2 Changes to the countryside included: the consolidation of a well-distributed population living in small settlements spread throughout a heavily-wooded countryside accessible primarily by small footpaths, into a few, tightly-controlled, more urban centers. Roads were built and well-maintained allowing greater mobility for government and military vehicles. The heavily-wooded areas along the roadsides disappeared. Finally, overuse of available land, erosion, and continued deforestation further lowered agricultural production and sped up environmental deterioration.3

The most revealing visual change to the landscape between 1979 and 1986 can be viewed in this (Landsat 1979 TM/1986 ETM+) NDVI false color composite, which demonstrates the extent and devastation of President Efrain Ríos Montt’s “scorched earth” strategy and the military’s systematic destruction of the rural settlements surrounding the municipalities of Santa Maria Nebaj, San Gaspar Chajul, and San Juan Cotzal. In the image, red represents areas vegetated in 1979 but not in 1986; green represents areas vegetated in 1986 but not in 1979; and yellow represents areas of no change.

The Normalized Difference Vegetation Index (NDVI) is a remote sensing application, which involves a ratio formula between the visual red and near-infrared (NIR) electromagnetic (EM) bands (Landsat MSS Bands 2 and 3, and Landsat TM Bands 3 and 4 respectively). This ratio application helps to distinguish healthy and stronger vegetation reflectivity from other materials with similar reflective qualities in those same EM band wavelength groups. NDVI applications are useful because two images can be processed into a false color composite, which allows for the detection of visual temporal change in vegetation coverage.

“Environmental Impact of Genocide in Guatemala: The Ixil Triangle and the Mexican Border,” GSP Working Paper no. 31, by Russell Schimmer