Indications of Genocide in the Bisesero Hills

According to a report of the International Criminal Tribunal for Rwanda (ICTR),1 the Bisesero Region (see image 2, down below) was the target of near-daily attacks in the period between April 9 and June 30, 1994. The attackers used firearms, grenades machetes, spears, clubs, and other weapons. Transportation used by the attackers included a variety of small and large vehicles. The attackers included gendarmes, communal policemen from Gishyita and Gisovu, armed civilians, and Interahamwe (an unofficial para-military group made up exclusively of extremist Hutu).

The genocide and the desperation of the resistance that characterized the events which occurred in the hills of the Bisesero Region, seem to have had profound repercussions on the landscape. This change to the landscape was probably a result of both attacks and resistance, including large numbers of pursuers and victims moving through the region, and the thousands of exposed decomposing corpses. There is no doubt that thousands of maimed corpses littered the landscape in this locality.

Three distinct features were discovered, labeled I, II, and III. Feature I represents the areas of known genocide and resistance activity (the Bisesero Region), and it also corresponds to areas where distinct change in the landscape was observed for the period during which the genocide occurred—in essence, these findings helped to define the areas comprising the Bisesero Region and those of the greatest activity related to the genocide and resistance. Feature II corresponds to the clearance of possible trails or roads that closely trace the Kirparo River and its tributaries, and which become more visible either during or immediately after the genocide events, possibly due to heavy use. Finally, Feature III corresponds to a still-unidentified “stain” on the landscape, which appears to be a memorial to the genocide victims. 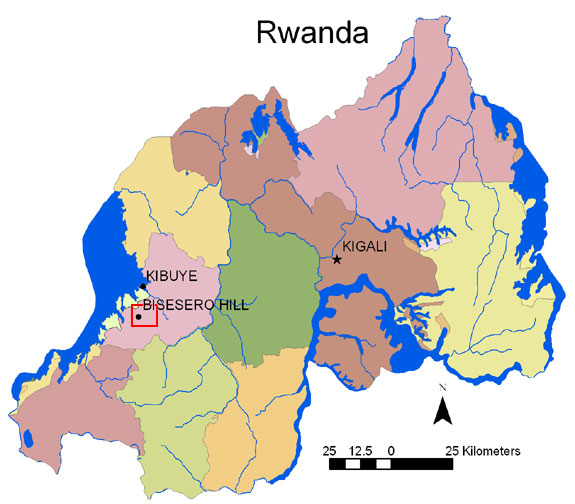 The research location, a series of hills known as the Bisesero hills, lies in southwestern Rwanda, in the prefecture of Kibuye and is part of the famous Congo-Nile water shed. Primarily an agricultural region, the landscape is characterized as undulating lush rolling hills, often separated by deep valleys, on the banks of Lake Kivu. The region contains many tea plantations, as well as some tin and precious-stone mines. In the higher elevations there are steep forested hillsides dotted with caves. Elevations range from 1400 to 2400 meters and Bisesero hill is at about a 2000 meter elevation. The region experiences two annual climatic seasons: the short rains (the main growing season) from about October to March, and the long rains from about March to December. For the purpose of this research, “Bisesero Region” pertains to the area outlined in red and lies between Gishyita and Gisovu communes of Kibuye Prefecture.

1. Foundation Hirondelle, BISESERO, THE HILLS OF DEATH, from ICTR/Bisesero, June 2, 2003.