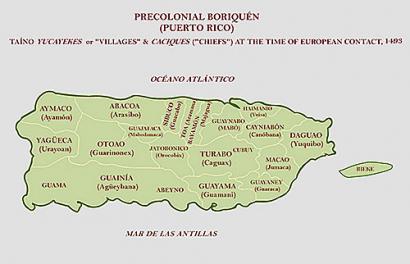 Puerto Rico is one of the world’s oldest colonies, having been under some form of military occupation or protectorate status since 1508. On November 19, 1493, during his second voyage, Christopher Columbus arrived in Puerto Rico. The indigenous Taíno culture dominated the island.[1] The Taíno called the island Borikén (Spanish Boriquen), “the land of the brave lord.” Columbus named the island San Juan Bautista in honor of Saint John the Baptist. Based on the archeological remains of Pre-Columbian people, the Puerto Rican archeologist, Don Ricardo Alegria, calculates that, at most, the island had some 30,000 inhabitants circa 1508.[2]

While governor of the Hispaniolan province of Higüey, Juan Ponce de León, a former lieutenant under Christopher Columbus, heard rumors regarding the wealth of gold on Boriquen; and on June 15, 1508, Nicolás de Ovando, the viceroy of Española (Hispaniola), granted Ponce de León the privilege to explore and subjugate the island of San Juan Bautista. On August 8, 1508, Ponce de León founded Caparra, the first European settlement in Puerto Rico, not far from the modern city of San Juan. The Taíno Cacique (Chief) Agüeybaná openly greeted Ponce de León. However, conflicts soon arose as the settlers began subjugating the Taíno. Within a year, Ponce de León had subdued a majority of the native population and gained control over most of the island. As a result of this success, Ponce de León was named Governor and Captain-General of Puerto Rico in 1509; Caparra was abandoned and the settlement relocated to a nearby coastal islet, named Puerto Rico (Rich Port). Sometime during the 1520s, the island took the name of Puerto Rico and the port (Puerto Rico) became San Juan. After a Taíno uprising in 1511, a second settlement, San Germán, was founded on the southwestern part of the island. 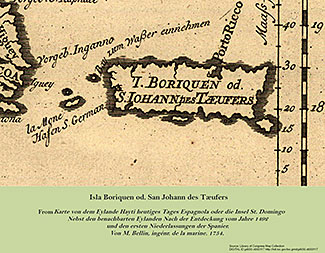 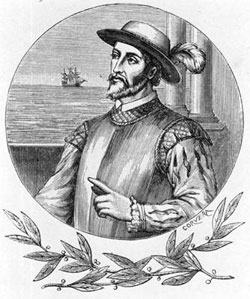 The encomienda system, a version of the European feudal trusteeship labor institution, reduced the Spanish-conquered American indigenous populations to a corvée (forced labor) class subject to the Conquistadors. In Puerto Rico, the Taíno primarily worked in the gold mines. As early as 1511, Fray Antonio de Montesinos argued from Catholic doctrine to advocate abolishing the forced servitude and inhumane treatment of the Taíno in Puerto Rico and Hispaniola. Although he and Bartolomé de Las Casas were eventually successful in influencing the Spanish crown, the high death rate among the Taíno due to enslavement and European diseases (smallpox, influenza, measles, and typhus) persisted.

Although remaining subject to the same obligations sustained by the other indigenous vassals, the Complementary Declaration of July 28th, 1513, established that those natives who were clothed, Christian, and capable could live their own lives.[3] A royal decree that collectively emancipated the remaining Taíno population is dated July 12th, 1520. One reason for this emancipation order was the large number of Taíno deaths attributed to the continuing bondage systems.[4] Ironically, by 1520 the Taíno presence had almost vanished. Governor Manuel de Lando’s census in 1530 reports the existence of only 1148 Taíno remaining in Puerto Rico. However, oppressive conditions for the surviving Taíno continued. Therefore, in 1544, Carlos I (Charles V, Holy Roman Emperor and King of Spain) decreed that the natives be as free as any Spaniard. In reality though, the declaration of equality did not end the colonial social class system.[5] 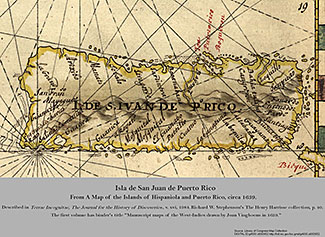 As part of the early colonization process, African slaves were introduced to the island in 1513 and institutional slavery would not be abolished until 1873. By 1540 the gold reserves on the island were nearly exhausted. However, the farms originally established to supply cattle, grain, fruits, and vegetables to the mining camps would capitalize on slave labor to sustain limited cash cultivation of cassava, corn, tobacco, plantains, rice, ginger, cocoa, cereals, vegetables, tropical fruits, and medicinal plants. Although already recognized as a valuable cash crop in the mid-16th century, the full potential of sugarcane cultivation, which demanded large investments in machinery and human and animal labor, was not realized until the 18th and 19th centuries. By 1898, when the U. S. annexed the colony, these early subsistence-farming activities had evolved into a considerable wealth-generating plantation system, cultivating sugarcane, tobacco, and coffee (see map). Surviving Taíno were few in number.