Video from “Bosnia: 25 Years After the Dayton Accords” now available 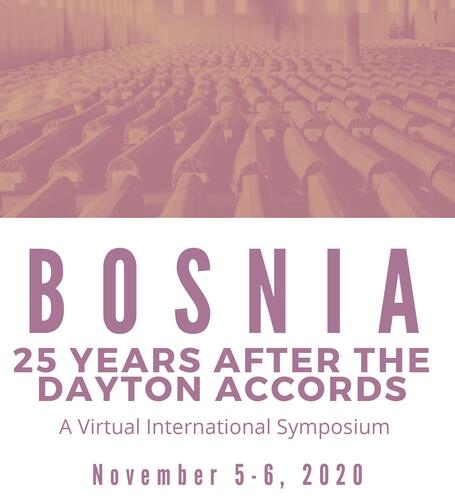 In November 2020, scholars from around the world “gathered” – virtually, at least – to discuss the legacies of the Dayton Accords on Bosnia and Herzegovina in an online symposium co-hosted by the Yale Genocide Studies Program.  Over the course of two days, scholars discussed the trajectory of politics and society since the war in the early 1990s, with specific panels focusing on themes like memorialization and transitional justice.  Valentin Inzko (the High Representative for Bosnia and Herzegovina) and Hariz Halilović (Professor at the School of Global, Urban and Social Studies, RMIT University, Melbourne) each delivered a keynote address.

Many of the events’ contributors soudned warnings about the potency of the ongoing political conflict.  Several echoed the theme that while the Dayton Accords had succeeded in ending violent conflict back in 1995, it left many of the strucutral issues and sources of tension unaddressed.  The political processes that were supposed to have moderated the worst extremist impulses in teh politics of the region have instead served as a home for extremist ambitions.  Despite the somber assessments of many commentators, there was nonetheless as sense of hope rooted in the community at large and evinced by that of the scholars present at the event itself.

Video from the event is now available, here.

A full schedule of the program is as follows: