Unhappy anniversary: Lessons unlearned from a tragic retreat 25 years ago 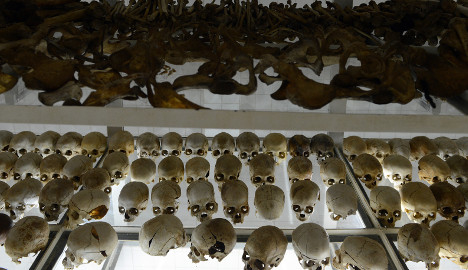 This month marks the 25th anniversary of the Genocide against the Tutsi in Rwanda. Commemorating genocide is painful. It requires staring back at dark moments when inhumanity at its worst defeated all decency. Yet there are two important reasons for engaging with the past at such moments. The first is to honor the memory of genocide’s victims, which is also to defy perpetrators’ efforts to erase a people from our world. The second is to seek lessons: to ask if the world is any different now from it was then, and to ask if it could happen again.

For this, the international community should consider its own darkest day from the 1994. Not April 6, when a missile brought down the then-president’s plane, prompting pro-regime forces to start arresting and killing political opponents, Hutu and Tutsi, throughout the capital city, Kigali; not April 7, the first day of the genocide, wherein armed forces, police, irregular militias, and common citizens would join in a sustained, coordinated effort to eliminate the country’s Tutsi population; and not even April 9, when scores of elite French and Belgian troops landed in Kigali, and with UN peacekeeper assistance, whisked white expatriates to the airport to be evacuated, while leaving thousands of Tutsis behind in the very same locations where most would soon be slaughtered.

The international community’s darkest day from the genocide in Rwanda is April 21, a date that is now not so much to be commemorated as reckoned with. It is the day the Security Council passed Resolution 912, which called for the withdrawal of the UN’s peacekeeping force, except for a skeletal staff tasked only with protecting UN assets (and with negotiating a truce if the opportunity arose).  Ten peacekeepers — all Belgians — had already been killed, and the Security Council members were anxious to avoid more casualties.

In retrospect, Security Council Resolution 912 was, unambiguously, an instance of failure. It is not that the UN failed to intervene when any reasonable amount of intelligence would have recognized that a genocide was underway. In fact, it failed because there was already a force in the country, and rather than reinforcing or encouraging it to take steps in the name of humanitarian intervention, the Security Council ordered its withdrawal.

About 400 UN troops defied the Council’s orders and remained behind under the command of Lt. Gen. Romeo Dallaire, but this contingent could only attempt to protect and rescue a fraction of what the retreating force, over five times larger, would presumably have been able to do.

What then, on April 21, 2019, can be gleaned from this shameful failure of a quarter century ago? Has anything changed since then? Would similar circumstances produce a similar result?

There are some reasons to posit that it would not. The United Nations recognized that it had failed, both in Rwanda in 1994 and again in Srebrenica a year later, in disturbingly similar ways. The UN and other actors have created early warning mechanisms, as well as dedicated institutions to ensure that the possibility of genocide is always considered. The UN also helped to conceive of a principle known as “the Responsibility to Protect,” which recognizes that sovereignty is not absolute, and that the international community must help protect individuals from the threat of mass atrocities when their states are unable or unwilling to do so. Although its particular implications remain contested and there remains certainly plenty of room to improve the UN’s operational capacity, the doctrine has been invoked in several episodes of perceived atrocity threat, and may have helped avert atrocities from taking place.

But, at the same time, several notable instances of genocide and/or other atrocities have taken place since 1994 — including ongoing situations in Cameroon, Central African Republic, Myanmar, South Sudan, Syria, and Yemen. Has the lesson of April 21 not been learned after all?

The emphatic, unfortunate answer has to be “no.”

The lesson of April 21 is much less about what the UN Secretariat and the organization’s peacekeeping operations had the capacity to do, and much more about what the member states — particularly those on the Security Council and especially those with permanent membership and a veto — had the will to do.  In Rwanda, the United States had very little will to do anything, albeit more out of national disinterest (the notion that Rwanda was irrelevant) than out of national interest as commonly construed.

More recently, other countries have “led the way” in blocking meaningful action in the face of atrocity. Russia protects Assad from the establishment of criminal investigations into possible war crimes in Syria. China protects its allies in Myanmar from any meaningful investigation into the persecution and forced displacement of that country’s Rohingya population. The United States and Russia both protect themselves and their respective regional allies from allowing possibility atrocities in Yemen to appear on the Security Council’s agenda.

From an atrocity prevention standpoint, each of these cases (and others like them) is tragic. It shows that one important lesson of Rwanda remains unlearned: that atrocity prevention requires not only that the United Nations, as an organization, be disposed to act when atrocities are imminent or underway, but that it’s most powerful member-states must adopt that mindset as well.

Instead, powerful nations appear to privilege regional power plays, realpolitik, and economic interests. To look back further — past genocide in Rwanda to the Holocaust — is to recognize the emptiness of that approach. Would any country today defend past inaction vis-à-vis the genocide against Europeans Jews in the 1930s and ’40s with the qualifier that “well, at least we maintained our commercial ties”? Or “At least another less powerful country in the region didn’t accumulate strength vis-a-vis its neighbors”?

Revulsion against genocide should be an absolute value. Genocide prevention will remain just a pipe dream so long as the United Nations’ member states treat it only as a relative one.