The Digital Memorialization project was founded in late 2017 by David Simon and Eve Zucker in response to the rapidly growing use of digital technologies both online and offline to memorialize genocides and other forms of mass violence. We developed the project in an attempt to unpack and study the impacts and ramifications of these new practices. In particular we seek to document and understand the ways in which past episodes of mass violence are remembered, narrated, memorialized and transmitted through these new technologies.  Questions that drove the impetus for the project included:

1.       How is the medium of digital technologies and platforms shaping the way in which past atrocities are being remembered and narrated?

2.       How do these technologies change the way we engage with these difficult pasts and share them with others?

3.       Who is producing the online memorial sites, who are they being shared with, and how are the various sites of memory communicating with each other (and where are they not)?

4.       What types of digital technologies are being employed outside of online spaces to transmit the past?

5.       What are the ethical questions that emerge with the new technologies in regards to mass atrocity memorialization and how can we work to ensure ethical practice?

6.       How might we include digital memorialization in education about genocide and mass atrocities?

As a first iteration of the project Simon and Zucker organized a one-day conference in Spring of 2018 on the theme Memorialization Unmoored: The Virtualization of Material Mediums of Social Memory hosted by the Genocide Studies Program at Yale (GSP) with sponsorship from the MacMillan Center, the  Edward J. and Dorothy Clarke Kempf Memorial Fund, and by the Reflections in the Aftermath of War and Genocide Consortium. A keynote was given by Mary Fetchet, founder and director of the non-profit Voices of September 11th and Alexandra Drakakis, Associate Curator of the 9/11 Museum. The event also featured special presentations by Stephen Naron, Yale Fortunoff Video Archive for Holocaust Testimonies and documentary filmmaker Taylor Krauss.

The papers from this conference were later developed into the edited volume coedited by Zucker and Simon: Mass Violence and Memory in the Digital Age: Memorialization Unmoored (Palgrave, 2020) featuring cases from the genocides in Rwanda, Cambodia, and Turkey (the Armenian genocide); the Holocaust, Haiti, the Portuguese colonial war in Africa, and the US (9/11). 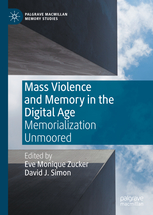