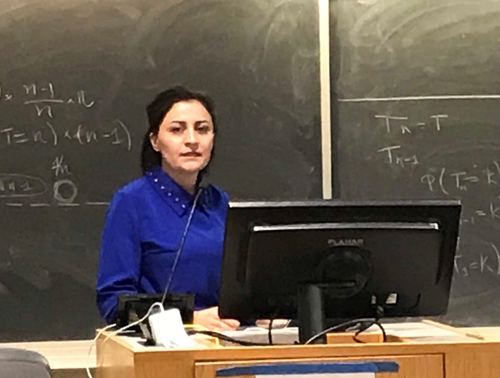 On August 3, 2014, the Islamic State (ISIS) attacked the region of Mount Sinjar in northern Iraq. This region was home to approximately 400,000 Yazidis, the members of an ancient and oft-persecuted religious minority found in Iraq and some parts of Syria. Over the course of the following weeks, as many as 5,000 Yazidis were killed, another 10,000 abducted, enslaved, and brutalized by ISIS fighters, and over 200,000 were forced to take flight. Nearly five years after that infamous day, some 3,000 Yazidi women and children are still missing, believed to be enslaved by ISIS. Hundreds of thousands of Yazidis are now living in displacement camps scattered across Iraq’s northern Kurdistan region, as well as abroad as refugees.

To raise awareness and promote scholarship of the Yazidi genocide, faculty, students, and members of the Yale and New Haven community came together on April 18 and 19 for a two-part commemoration organized by the Genocide Studies Program and sponsored by the Charles E. Scheidt Family Fund and the Edward J. and Dorothy Clarke Kempf Memorial Fund. The first part featured Nadia Murad, recipient of the 2018 Nobel Peace Prize, in conversation with Professor David Simon, director of the Genocide Studies Program at the MacMillan Center.

Nadia Murad was one of the women abducted by ISIS fighters during the 2014 genocide. Soon after her capture, at the age of 21, she was sold into slavery in Mosul, Iraq. After enduring unspeakable horrors for several weeks, she managed to escape her captors. Upon reaching safety, Ms. Murad turned her attention and energy towards helping those left behind. In 2015, she briefed the UN Security Council on human trafficking in Iraq, was named Goodwill Ambassador of the United Nations for the Dignity of Survivors of Human Trafficking, and also founded Nadia’s Initiative, an organization dedicated to advocacy on behalf of and assistance to victims of human trafficking and genocide. In 2018, Ms. Murad was awarded the Nobel Peace Prize for her courage, activism and resilience.

In her conversation with Professor Simon, Ms. Murad talked about her work as an anti-genocide activist and how her experiences have influenced her work. She also discussed the specifics and the effects of the Yazidi genocide, including how these influence the needs of the Yazidi people in 2019. She stated that the Yazidi people are still living in Iraq in fear to this day. The basis of this fear, she said, is the “absence of a true Yazidi homeland.” Ms. Murad pointed out that this homeland had to be one separate from Iraq and separate from Kurdistan. Later an audience member movingly recounted that she too had endured a genocide in her home country of Rwanda in 1994. Soon after witnessing the horrors of what the genocide had done to her country, she found her and her friends to be the victims of sexual violence while living in refugee camps in the Congo. She then asked Ms. Murad, what advice she would give to young women looking to move past their painful past in order to make a difference. Nadia Murad responded, that as victims of these horrific crimes of sexual assault, they must find the strength within themselves. She admitted that it is not an easy task, however, she emphasized that it is possible to use that pain to create something meaningful and beneficial.

The second part of the commemoration took the form of an all-day symposium at the Watson Center bearing the title, Yazidi Genocide: Prosecution, Protection, Preservation. The symposium investigated the challenges facing the Yazidi people in the aftermath of the 2014 ISIS attacks.

In Prosecution Issues, Kjell Anderson, an instructor in Peace and Conflict Studies at the University of the Fraser Valley talked about the forced marriage of Yazidi women to ISIS fighters and the sex slavery that took place during the conflict and how both of these constituted as forms of genocide. He also highlighted the differences and nuances between the two and how subtle differences in definition can, and has, had a great effect on the prosecution of those behind these crimes. This concept was further expanded by Akili Radhakrishnan and Grant Shubin from the Global Justice Center in their joint presentation about how to ensure accountability for these sexual and gender-based crimes of genocide. Naomi Kikoler from the Simon-Skjodt Center for the Prevention of Genocide at the U.S. Holocaust Memorial and Museum addressed the crimes of genocide, the prevention of genocide, and how, if possible, perpetrators of such crimes can be prosecuted.

Sareta Ashraph, barrister at law, opened up the second panel, Protection at Home and Abroad, with an astonishing presentation that carefully and intricately wove together the hard facts of the genocide with a series of snapshots of the realities on the ground. By contextualizing the Yazidi Iraqi community in the genocide, Ms. Ashraph spoke about how Iraq looks today, not only for the Yazidi community, but as a nation as a whole, recovering from the aftershock of ISIS. Ms. Ashraph also discussed how the Yazidi religious community has adapted as a result of the effects of the genocide. For example, in the Yazidi religion, a Yazidi woman is no longer of the faith if she has intercourse with a non-Yazidi man. As a result of the sexual violence and sex crimes committed against Yazidi women during the genocide, a majority of the women were no longer deemed to be Yazidi. Ms. Ashraph highlighted how during her work with the community in Iraq, she witnessed the high Yazidi religious council adapt these rules to readmit Yazidi survivors of sexual violence back into the folds of the religion. Ms. Ashraph was followed by Emily Feldman, a journalist and editor, who spoke specifically about Yazidi minors who were captured by ISIS. She stated that the capture and forced displacement of young minors in and of itself is a form of genocide. In 2014, ISIS forced thousands of young boys to join their ranks. This involved removing them from their families and forcing them into ISIS training camps. Not all camps were fighting camps. There were “rehabilitation” camps where the minors were effectively stripped of their Yazidi identity and integrated into Islam. As a result, almost an entire generation of young Yazidi boys have experienced the critical years of their lives in this environment. Ms. Feldman spoke about what it would take in order to rehabilitate and reintegrate these minors, not only into greater society, but also back into their Yazidi religious communities. Lastly on this panel was Melinda Taylor, counsel in international criminal law and human rights, based at the Hague. She addressed the human rights atrocities that were committed at the expense of the Yazidis and what it would take for the community to recover from such horrendous crimes. She also highlighted the asylum process by which members of the Yazidi community can apply for asylum outside of Iraq.

The final panel was titled, Preservation of Culture and Society at Home and Abroad. In this panel Tutku Ayhan, PhD candidate in Security Studies at the University of Central Florida shared her research that focuses on investigating the transformative influences of mass violence on gender dynamics within the Yazidi community both in Iraq and abroad. Ms. Ayhan was followed by Matthew Barber, PhD candidate in Near Eastern Languages and Civilizations at the University of Chicago, as well as former director of Yazda in Iraq.  He provided an overview of the political history of Iraq and Kurdistan in the aftermath of the 2014 genocide, and then discussed how this political history affects the return and the creation of a Yazidi homeland. A majority of Yazidis live outside of the Sinjar region of Iraq, which at one point had aspirations of being an independent state. Mr. Barber’s presentation was followed by Guley Bor’s presentation from the Conflict Research Programme in Iraq where she discussed the specificities of Iraq’s governmental response to the genocide. Ms. Bor shared in her presentation that in the weeks prior to the conference, the Iraqi presidency submitted a Yazidi Female Survivors’ Law which applies to Yazidi women who were kidnapped and enslaved by ISIS, who were later rescued or escaped. This law would award financial and ethical compensation to these survivors in order to rebuild their lives and towns, as well as help facilitate rehabilitation and reintegration into society. Ms. Bor discussed how this law also acknowledges that the crimes committed against Yazidi women are categorized as a genocide and how this will influence criminal proceedings against the perpetrators. Ms. Bor’s presentation was followed by Salema Mirza’s, instructor and advisor at the Yazada Yazidi Cultural Center in Lincoln, Nebraska. Ms. Mirza talked about how the center works to provide a communal space where Yazidis feel safe and can promote the preservation of their culture in exile.

The presenters and speakers throughout the symposium generated lively scholarship and discussion. The breadth of the information covered, along with the sensitivity and depth that each of the topics were addressed and discussed made the symposium all the more intentional and thoughtful. Reflecting on the energy and inspiration of the group and their respective presentations, Professor Simon wrapped up the symposium expressing the hope that it would “be the beginning of something and not an end in itself.”

Written by Susan Aboeid, Class of 2019. This article orginially appeared on the MacMillan Center website.