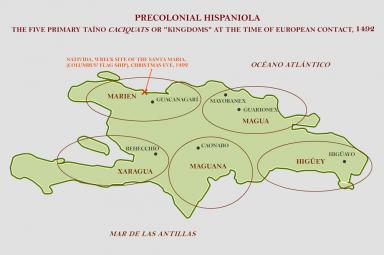 The precontact Taíno culture occupying the island of Haiti (also indigenously referred to as Quisqueya or Bohio) was a well-organized communal society divided among five caciquats or “kingdoms.” In Taíno, Haiti means “high ground” or “mountainous land.” However, the Taíno population (Taíno meaning “good” or “noble”) was primarily concentrated on the island’s coastal plains and interior valleys. Each caciquat was governed by a cacique (chief). Christopher Columbus renamed the island Española (Hispaniola) meaning “little Spain.” On December 5, 1492, Columbus anchored off the northern shoreline of Haiti, near modern Cap-Haïtien. On Christmas Eve 1492, the Santa Maria (Columbus’ flagship) sank just off of an inlet Columbus would later name La Nativida. The Taíno cacique, Guacanagarí, allowed Columbus to leave 39 men behind at the settlement of Nativida. On his return in 1493, Columbus moved his coastal base of operations 70 miles east to what is now the Dominican Republic and established the settlement of  La Isabela, the first permanent Spanish settlement in the Americas. 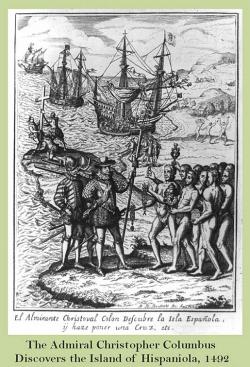 It is uncertain how many Taíno were living in Hispaniola at first contact. Estimates of the population range from several hundred thousand to over a million.[1] Soon after Columbus’ return, more Spanish settlers arrived; and by 1504 the last major Taíno cacique was deposed during the War of Higüey. Over the subsequent ten years, living conditions for the Taíno declined steadily. The Spaniards exploited the  island’s gold mines and reduced the Taíno to slavery. Within twenty-five years of Columbus’ arrival in Haiti, most of the Taíno had died from enslavement, massacre, or disease.  By 1514, only 32,000 Taíno survived in Hispaniola.